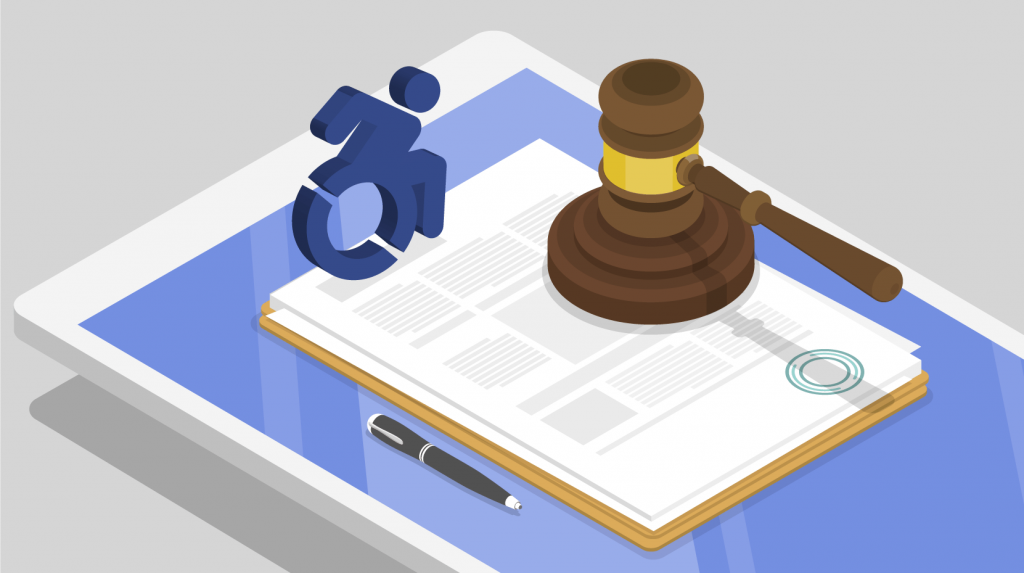 A recent website accessibility decision out of the Ninth Circuit Court of Appeals reaffirmed the application of the Americans with Disabilities Act to websites while dismissing arguments that doing so would violate the due process rights of defendants in the absence of regulations from the Department of Justice.

The case, Robles v. Dominos Pizza LLC, which was filed in the Central District of California in September 2016, centered on the inability of individuals who were blind or had limited vision to use Domino’s website to order pizzas online with the use of screen-reading software.

In a March 2017 decision, District Judge S. James Otero dismissed the lawsuit, holding that while ADA Title III applied to the internet, allowing the case to proceed in the absence of clear web accessibility regulations from the Department of Justice (DOJ) would violate Domino’s due process rights and that the primary jurisdiction doctrine required the court to defer to the DOJ until it acted. Judge Otero was especially concerned about using the World Wide Web Consortium’s Web Content Accessibility Guidelines (WCAG) as a legal standard in the absence of specific regulation.

Although the DOJ released an Advance Notice of Proposed Rulemaking (ANPRM) in 2010 announcing that it was considering web accessibility regulations, no regulations were ever issued. Instead, the DOJ rescinded the ANPRM in 2017, though it has since reiterated its position that the ADA applies to websites.

In a unanimous decision by Judge John B. Owens, joined by Judges Paul J. Watford and Jennifer G. Zipps, the Ninth Circuit panel reversed Judge Otero’s ruling and remanded the case so that it could proceed to trial. In so doing, the panel held that ADA Title III applies to websites, that the lack of official web accessibility regulations does not raise due process concerns, and that the primary jurisdiction doctrine does not apply. The panel also suggested that lower courts could reference WCAG 2.0 guidelines when structuring remedies.

Under prior precedent, the Ninth Circuit has adopted a nexus requirement in ADA Title III cases, permitting suits to proceed only where there is “some connection between the good or service complained of and an actual physical place.” See Weyer v. Twentieth Century Fox Film Corp., 198 F.3d 1104 (2000).

Although district courts within the Ninth Circuit have previously found that ADA Title III applies to websites, the Ninth Circuit Court of Appeals had not itself upheld that finding. The single prior web accessibility case to come before the Court of Appeals—Cullen v. Netflix, Inc. (2015)—resulted in an unpublished decision that upheld the dismissal of a suit against Netflix because the streaming video service had no nexus to an “actual, physical place,” without reaching the question of whether Title III would apply in other cases.

The panel did not, however, offer guidance on when a website would or would not qualify as a nexus to a physical location, as Domino’s had not expressly contested this point in the case below. The panel instead left this question open for future cases: “We need not decide whether the ADA covers the websites or apps of a physical place of public accommodation where their inaccessibility does not impede access to the goods and services of a physical location.”

More dramatically, however, the Ninth Circuit panel reversed the district court’s holding that imposing Title III liability on Domino’s in the absence of DOJ regulations would violate the company’s due process rights.

According to Domino’s, the DOJ’s failure to adopt web accessibility regulations left the company without “fair notice of what specifically the ADA requires companies to do in order to make their websites accessible.” Instead, Domino’s argued, the plaintiff was trying to rely on WCAG 2.0, a privately-developed, voluntary standard, in lieu of DOJ regulations. This, per Domino’s, violated its due process rights.

(While WCAG 2.0 has been adopted as a legal standard under some federal laws, including Section 508 of the Rehabilitation Act, as well as the Air Carrier Access Act, it has not been formally adopted into regulations under the ADA.)

The panel, however, noted that Domino’s had been under notice of its requirement of its general obligations under Title III, including the requirement to provide auxiliary aids and services, since the ADA’s enactment in 1990, and had had notice of the application of the ADA to websites since the DOJ made its first statement to that effect in 1996. “Thus, at least since 1996, Domino’s has been on notice that its online offerings must effectively communicate with its disabled customers and facilitate ‘full and equal enjoyment’ of Domino’s goods and services.”

The panel also found that the plaintiff’s reference to WCAG 2.0 did not raise due process issues, as he “does not seek to impose liability based on Domino’s failure to comply with WCAG 2.0,” but instead “merely argues—and we agree—that the district court can order compliance with WCAG 2.0 as an equitable remedy if, after discovery, the website and app fail to satisfy the ADA.” In other words, the plaintiff’s claim arose and would be evaluated under general Title III principles, rather than compliance or non-compliance with WCAG success criteria, but WCAG could be used by the district court in constructing a remedy.

On the DOJ’s lack of regulation, the panel found that while it understood “why Domino’s wants DOJ to issue specific guidelines for website and app accessibility, the Constitution only requires that Domino’s receive fair notice of its legal duties, not a blueprint for compliance with its statutory obligations.” Moreover, the panel noted that the lack of specific guidelines offered organizations flexibility in how they achieved compliance with Title III. “This flexibility is a feature, not a bug, and certainly not a violation of due process.”

The Primary Jurisdiction Doctrine Does Not Apply

Under the primary jurisdiction doctrine, a court may “stay proceedings or to dismiss a complaint without prejudice pending the resolution of an issue within the special competence of an administrative agency.” The doctrine is not typically invoked, however, where an agency has expressed in interest in the subject matter of the litigation or a referral to the agency would significantly delay a decision that the court has jurisdiction to make.

Considering that the DOJ revoked the ANPRM in 2017 and has no administrative process by which the plaintiff could raise his complaint directly with the DOJ, the panel found reliance on the primary jurisdiction doctrine unwarranted.

Having found that websites and mobile apps fell under the coverage of Title III, that Domino’s website served as a nexus to its physical locations, that Domino’s due process rights were not violated, and that the primary jurisdiction doctrine did not apply, the panel remanded the case to the district court for further consideration of whether Domino’s website and app comply with Title III. Depending on how much discovery is required, a final decision in the case could come later this year or in 2020 or later—if the parties don’t settle in the meantime.

Alternatively, Domino’s could seek to have the case reheard en banc by the entire Ninth Circuit or could motion for a writ of certiorari with the Supreme Court, although both neither request is likely to be granted at this point given the lack of conflicting precedent and unanimous nature of the panel’s decision.

As the Ninth Circuit’s first published digital accessibility decision, Robles v. Dominos Pizza LLC is likely to have a significant impact on web accessibility litigation. By reversing a negative precedent that may have been dissuading some plaintiffs and plaintiffs’ firms from filing suit, it will likely encourage digital accessibility against places of public accommodation that operate within the Ninth Circuit’s territory, which includes much of the western United States.

This litigation won’t just be focused on websites, though. By treating Domino’s website and mobile app under the same standard—and making clear that ADA Title III applies to apps—the panel has likely made it easier for plaintiffs to bring app-centric cases.

The decision is also likely to have an impact on courts far beyond the Ninth Circuit. By ruling definitively against Domino’s due process defense, the Ninth Circuit has established a precedent that will likely be referenced by courts across the country when defendants raise similar arguments. As a result, we will likely see a stronger push from business organizations for web accessibility guidelines from the DOJ.

Finally, as the first Circuit Court decision to endorse the use of WCAG 2.0 success criteria at the remedies stage, the decision is likely to help reinforce the importance of WCAG as the de facto standard, even in the absence of DOJ regulations to that effect.

This blog post is for informational purposes only and does not constitute legal advice.

PrevPreviousA blind man couldn’t order pizza from Domino’s. The company wants the Supreme Court to say websites don’t have to be accessible
NextSupreme Court allows blind people to sue retailers if their websites are not accessibleNext
Working on a website can be difficult. Adding new media and updating pages is chore, even though you know your company website needs to evolve and become more accessible to the many users you are trying to reach. Maybe when you first built it, accessibility wasn’t even really discussed. But now you’ve taken a step back, looked at your customer base with a desire to include everyone and you’ve realized just how important it is to make your site accessible. However, the thought of building a robust site that can do all the things you want it to do is overwhelming.